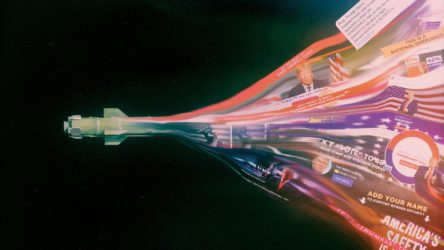 Featured – The Billion-Dollar Disinformation Campaign to Reelect the President. By McKay Coppins / The Atlantic

The president’s reelection campaign was in the midst of a multimillion-dollar ad blitz aimed at shaping Americans’ understanding of the recently launched impeachment proceedings. Thousands of micro-targeted ads had flooded the internet, portraying Trump as a heroic reformer cracking down on foreign corruption while Democrats plotted a coup. That this narrative bore little resemblance to reality seemed only to accelerate its spread. Right-wing websites amplified every claim. Pro-Trump forums teemed with conspiracy theories. An alternate information ecosystem was taking shape around the biggest news story in the country, and I wanted to see it from the inside. Read more  Also see, Trump Is Waiting and He Is Ready

Incidents of white supremacist propaganda distributed across the nation jumped by more than 120% between 2018 and last year, according to the Anti-Defamation League, making 2019 the second straight year that the circulation of propaganda material has more than doubled. Read more

Alabama Lawmakers Want to Force One of America’s Blackest Cities to Celebrate White Supremacy. By Michael Harriot / The Root

The mayor of the city with one of the highest percentages of black residents in America spoke out on Tuesday against legislation that compels the city to celebrate its Confederate heritage even though—and this part is absolutely bonkers—the city doesn’t have one. Read more

I Can’t Believe Black People Might Actually Vote for Michael Bloomberg. By Michael Herriot / The Root

On Monday, audio surfaced from a 2015 Bloomberg speech at the Aspen Institute (which is partially funded by Bloomberg Philanthropies). In the clip, dug up by podcaster Benjamin Dixon, the former New York City mayor defends his stop-and-frisk program that disproportionately targets and criminalizes black and Latinx boys, according to sociologists, criminologists, data and statistics. Read more Also see, Paging Michael Bloomberg And also see, The Mike Bloomberg Black New Yorkers Know

How the nation chooses to define greatness will have grave implications. On the one hand, we can choose to “make America great again” by embracing an ethos of xenophobia, misogyny, and racism, as has been advocated by the current President of the United States. According to this definition of greatness, we should always put America first, even when others are desperately in need of assistance. Thus, when asylum seekers arrive at our borders, the President’s definition of greatness dictates that we give in to a politics of fear and turn them away on the flimsy premise of their proclivity to violence. In contrast, King called upon Americans to redefine greatness by embracing an ethos that he called “dangerous altruism.” Read more

Author Gabriel Bump: “We might be moving towards worse racial issues.” By D. Watkins / Salon

Rising literary star Gabriel Bump released his debut novel “Everywhere You Don’t Belong,” a coming of age story about growing up on the South Side of Chicago in the 1990s, last week. Both the New York Times and Kirkus praised the book for being both funny and heavy, and I agree. Bump stopped by “Salon Talks” to discuss “Everywhere You Don’t Belong” with me and what it’s like writing about teenagers today where outward identity, activism, and being exceptional are top of mind for so many kids. Read more

Currently, the Democrats have an extremely flawed process that has now — with the departures of Andrew Yang and Deval Patrick — pushed out every candidate who isn’t white, save Tulsi Gabbard. And we sorely miss the perspectives of Harris, Cory Booker, and Julián Castro, candidates who never even got to face the voters’ judgment. Yet it has made space for two white billionaires who have been able to buy their way into the process without contributing enough in the way of new ideas or direction — particularly for black, Hispanic, and Muslim communities that have been targeted most acutely by the Trump administration. Read more

Howard University’s Largest Donation Ever Raises Questions About Who Gets Donor Coins. By Jenny Gathright / NPR

After a $10 million gift from the Karsh Family Foundation last month, the STEM scholars at Howard will be able to support more students. (The program was previously called the Bison STEM Scholars Program; It has since been renamed.) According to David Bennett, Howard University’s vice president of development, it is the largest gift given by a living individual in the institution’s history. Read more

Hours after a divided House committee advanced a D.C. statehood bill Tuesday, House Majority Leader Steny Hoyer promised a floor vote “before the summer,” setting the stage for the measure to be approved by a congressional chamber for the first time in history. A vote would force Democrats and Republicans to go on the record about their views on making the nation’s capital the 51st state before they face reelection in November. Read more

Why President Trump’s bid for the black vote is unlikely to bear fruit. By Charles Lane / Wash Post

The hot topic in American politics is President Trump’s bid to win black voters away from the Democratic Party. His campaign ran a Super Bowl ad touting his signature on a bill that helped a black grandmother get out of federal prison; during his State of the Union address, the president boasted that African American unemployment has never been lower and presented a series of black beneficiaries of his policies. Will it work?  Read more

Jesse Owens vs. Hitler wasn’t the only story at the 1936 Olympics. By Andrew Maraniss / The Undefeated

In the decades to come, Jesse Owens’s record-setting performance at the 1936 Olympics in Berlin, the gold medals he won in the 100-meter sprint, 200-meter sprint, long jump, and 4×100 relay would be celebrated as a powerful rebuke of Adolf Hitler. A black man’s incredible success in a crucible of hate served as the ultimate rejection of the idea of white supremacy. But this conventional wisdom is an oversimplification on two levels. First, Owens wasn’t the only African American star in Berlin, even in his own events. Read more

The Manhattan District Attorney’s Office has opened a new review of the murder of Malcolm X after a Netflix documentary resurfaced questions about who did or didn’t commit the crime. Malcolm X was assassinated in front of his wife and children on Feb. 21, 1965, while giving a speech at the Audubon Ballroom in New York City’s Washington Heights. In the new six-part Netflix documentary, “Who Killed Malcolm X?,” historian Abdur-Rahman Muhammad says Aziz and Islam had alibis. “The thing is, two of them weren’t even in the Audubon ballroom that day,” he says. Read more

The victory of “Parasite” is a stunning moment that may not also be a watershed moment. It’s certainly cause for celebration that an organization with notoriously questionable taste seems to have gotten it right this year, and it’s unquestionably huge for the South Korean film industry. But despite the initial euphoric reaction from many Asian-Americans, the “Parasite” victory has nothing to do with Asian-American representation. Read more

In his Oscar acceptance speech Sunday, Matthew A. Cherry, the director of the Academy Award-winning animated short film “Hair Love,” called attention to efforts to ban discrimination by schools and employers against black hairstyles amid growing momentum for the movement to normalize natural hairstyles. Read more

Giannis Antetokounmpo wants to represent best of both worlds. By Marc J. Spears / The Undefeated

Reigning league MVP Giannis Antetokounmpo continues to show he’s more than just the “Greek Freak.”As an All-Star captain this year, the Milwaukee Bucks forward displayed his pride in his African heritage during the All-Star draft. “With my first pick I’m going to go with my African brother,” Antetokounmpo said during the telecast. “I’m going to go with Joel Embiid.”And with his second pick, he took his “second African brother,” Pascal Siakam. Read more

Baseball Makes An Early Pitch To Catch The Interest Of Black Players. By Exther Ciammachilli / NPR

February 2020 marks the 100th anniversary of the Negro Leagues, which once provided African-Americans the chance to play professional baseball before the game was integrated. Now, a century later, African-American participation in baseball is lagging. The number of black Major Leaguers is only 8.4%, according to The Institute for Diversity and Ethics in Sports. Read more