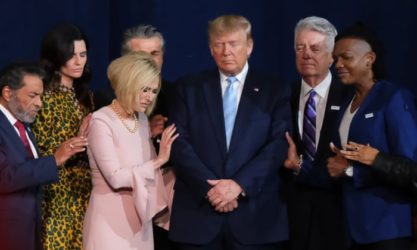 Featured – Evangelicals using religion for political gain is nothing new. It is a US tradition. By Reverend William Barber / The Guardian

Last Friday the Trump 2020 campaign held its first rally at a megachurch. King Jesus international ministries, located outside of Miami, Florida, hosted the Evangelicals for Trump Coalition kick-off. Before boasting about his commitment to fight for the religious right’s agenda, the president bowed his head to receive prayers from prosperity preacher Paula White and other religious nationalists who offer spiritual cover for a corrupt and immoral administration. As a bishop of the church, I am troubled anytime I see Christianity used to justify the injustice, deception, violence and oppression that God hates. Read more

How would the far right react to a Trump loss? Here’s a glimpse. By Paul Waldman / Wash Post

Many Americans are terrified of what would happen if Donald Trump won a second term in office. But perhaps we should be nearly as scared of what will happen if he loses in November. More specifically, a victory by Democrats at the federal and state level could produce a backlash in which Trump’s fervent supporters, not to mention those on the far-right fringe, conclude that the ordinary avenues to political influence are hopelessly corrupted and therefore other, more radical means must be employed. Read more 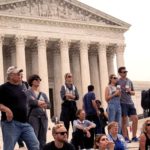 Democracy fatigue and how to fight it: Philosopher Henry Giroux on life in the age of Trump. By Chauncey DeVega / Salon

Is “democracy fatigue” just a form of cowardice? What can be done to counter it? How have centrist voices in the mainstream news media and elsewhere helped to normalize and sustain Donald Trump, his Republican Party and their movement’s assault on democracy? How can the American people prepare themselves in 2020 and beyond for Trump’s and the Republicans’ escalating attacks on American democracy, human rights and the rule of law? In an effort to answer these questions, I recently spoke with philosopher Henry Giroux. He is a professor of English and cultural studies at McMaster University in Hamilton, Ontario, Canada. Read more

The Equality Conundrum. We all agree that inequality is bad. But what kind of equality is good? By Joshua Rothman / The New Yorker

In 2014, the Pew Research Center asked Americans to rank the “greatest dangers in the world.” A plurality put inequality first, ahead of “religious and ethnic hatred,” nuclear weapons, and environmental degradation. And yet people don’t agree about what, exactly, “equality” means. In the past year, for example, New York City residents have found themselves in a debate over the city’s élite public high schools, such as Stuyvesant and Bronx Science. Some ethnicities are vastly overrepresented at the schools, while others are dramatically underrepresented. What to do? Read more

Last week, longtime Republican political strategist Stuart Stevens wrote a piece for The Washington Post, arguing that the Republican Party has lost its moral compass under this administration and “stands for all the wrong things now.” But for marginalized people who have been on the receiving end of the long-standing Republican racism and fury, Stevens’s claims about a party set tragically adrift by a racist opportunist was a gross oversimplification of political reality. Read more

An Open Letter to John Lewis. By Margaret Renkl / NYT

Dear Mr. Lewis, I write with a heavy heart. Stage 4 pancreatic cancer is a brutal diagnosis, so it’s no surprise that last Sunday night the internet erupted with anguish as news of your illness became public. Treatment may give you a “fighting chance” to continue working “for the Beloved Community,” as you wrote in a statement, but it’s painful to think of what you will be called on to bear in the coming months. You have already borne so much for us. Read more

Colin Kaepernick attacks US ‘imperialism’ in wake of Suleimani strike. By Tom Lutz / The Guardian

“There is nothing new about American terrorist attacks against Black and Brown people for the expansion of American imperialism,” he wrote on Twitter. Kaepernick expanded on the topic in another tweet: “America has always sanctioned and besieged Black and Brown bodies both at home and abroad. America militarism is the weapon wielded by American imperialism, to enforce its policing and plundering of the non white world.” Read more 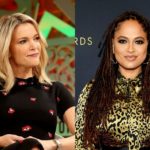 Hurl Bibles or Hot Coffee: How One Church Is Preparing for Attacks. By Audra D.S. Burch / NYT

The tiny white church has new locks, peepholes and brass plates. While its parishioners pray, the sanctuary is bolted shut and a police officer is now stationed outside. Soon, surveillance cameras will be installed, and the 47-member congregation will participate in active-shooter training. This is the next chapter for the Bethel African Methodist Episcopal Church, which the authorities said was targeted in mid-November. Read more

Despite this rapid growth, today’s diversity industry has largely failed to usher in the diverse workplaces and schools it promises. A growing number of empirical studies suggest that anti-bias training (also known as implicit bias training) and other diversity initiatives don’t work. Read more

The GOP-controlled legislature passed a law along party lines that effectively required a poll tax from a majority of those poised to regain their right to vote. The GOP’s brazenly partisan measure, however, appears to be backfiring. Democratic counties are taking advantage of a compromise buried in the statute to give residents their voting rights. Meanwhile, Republican counties are taking a hard line against suffrage—meaning a substantial majority of Floridians who do manage to register to vote are likely to be Democrats. Read more

It would stand to reason that the end of government-sanctioned redlining, with the 1968 passage of the Fair Housing Act and the Housing and Urban Development Act, would have begun to reverse housing segregation and inequality. But in fact, writes Keeanga-Yamahtta Taylor in her new book Race for Profit, that was when things started to get worse. Read more

Such a Fun Age Satirizes the White Pursuit of Wokeness. Kiley Reid’s debut novel is a funny, fast-paced, empathetic examination of privilege in America. By Stephanie Hayes / The Atlantic

“A comedy of good intentions” might seem an improbable description of a book that lays bare issues of race and class in contemporary America—but that’s how Kiley Reid aptly sums up her debut novel, Such a Fun Age. Shown is Kiley Reid, who spent six years caring for the children of wealthy Manhattanites, writes from the alternating perspectives of a babysitter and her boss. Read more

Four gifted women of color inhabit a multigenerational saga of slavery, rebellion, and magic. In 1791, Haiti’s slave rebellion is beginning, as escaped slaves known as maroons are mustering forces. Abigail, whose husband, a rebel, is executed by the whites, is taken by her mistress, Ninette, to New Orleans. Soon after arriving, though, Abigail is rescued from slavery by an ancient crone and a seemingly ageless man named Josiah, who educate her in the dark arts. Read more

In 19 minutes, the sum of Keeth Smart’s life plays out in an inspiring short documentary that speaks to one man’s uncompromising desire to achieve in the face of hardship. Using a combination of black and white animation, raw family footage and interviews, “Stay Close” illuminates Smart’s ascension from a West Indies community in Brooklyn to the apex of a sport blacks rarely compete in: fencing. Read more

The NFL has a dilemma, one that has been a long time coming but has arrived in full force. The league’s most important position, quarterback, is becoming its most explosive position. But how will the league extend the same protection under NFL law to these dynamic new-age players, given the traditional pocket-passer quarterbacks they are replacing? Read more

Can artificial intelligence help us understand racial bias in sports. By C. Brandon Ogbunu / The Undefeated

It is society’s inability to adequately address issues of race and bias that motivated Mohit Iyyer, an assistant professor of computer science at the University of Massachusetts Amherst, to apply artificial intelligence and “big data” analytics toward answering a central question: Do sports commentators demonstrate bias in how they discuss athletes from different racial backgrounds? Read more