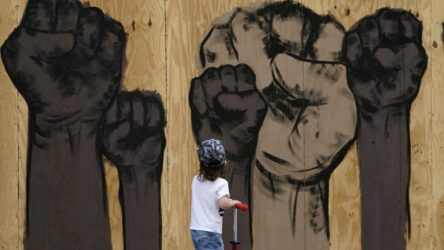 Featured – America is facing a reckoning over race, but we’ve seen this before. By Michael A. Fletcher / The Undefeated

What kind of country sees Black Lives Matter as a radical idea and Black suffering and death as unremarkable? The nation has experienced startling racial watersheds before, of course, and each time African American gains were stifled long before full equality was achieved.  Read more

Related: Let’s Finish the American Revolution. Our nation’s founding was a mess of contradictions. We must push America closer to its ideals. By Timothy Egan / NYT

Caste and race are neither synonymous nor mutually exclusive. They can and do coexist in the same culture and serve to reinforce each other. Race, in the United States, is the visible agent of the unseen force of caste. King discovered that people in India had been following the trials of his own oppressed people in America, knew of the bus boycott he led. One afternoon, King and his wife journeyed to the southern tip of the country, to the city then known as Trivandrum in the state of Kerala, and visited with high school students whose families had been untouchables. The principal made the introduction. “Young people,” he said, “I would like to present to you a fellow untouchable from the United States of America.” King was floored. Read more

Related: A Racist Attack on Children Was Taped in 1975. A snippet of the documentary “Rosedale: The Way It Is” has ricocheted across the internet, upending for another generation New York City’s narrative as a bastion of tolerance. By Sarah Maslin Nir / NYT

Donald Trump is the 21st-century Jefferson Davis: History will judge him — and us. By Chauncey DeVega / Salon

On Friday, Donald Trump and his wife Melania attended an early Independence Day celebration held at Mount Rushmore. There were fireworks, a military flyover, and “patriotic” songs such as “The Star-Spangled Banner”. The entire spectacle embodied the worst kind of superficial juvenile patriotism. More than 130,000 Americans are dead from the coronavirus pandemic. The country teeters on the edge of a second Great Depression. A neofascist regime rules in Washington. Donald Trump is in thrall to Vladimir Putin and Russia and in doing so actively betrays the United States and the American people. Music and fireworks and loud planes are distractions for a country facing an existential crisis. Read more

Related: Native American protesters blocked the road leading up to Mount Rushmore and faced off with the National Guard in the hours before Trump’s fiery speech. By Ashley Collman / Business Insider

Former Vice President Joe Biden offered a message of hope and unity on Fourth of July that was in sharp contrast to the divisive tone of President Donald Trump’s address at Mount Rushmore on Friday. With a message that centered around racial justice, Biden said that the United States “never lived up” to its founding principle that “all men are created equal.” Read more

The Case for Kamala Harris. By Susan Matthews / Slate

Kamala Harris has been the obvious option to be Joe Biden’s running mate for a long time. As my colleague Jim Newell wrote back in March: “Kamala Harris is a smart, charismatic black woman with high name recognition who is not old and is qualified to serve as president on Day One, and while she is not of ‘the left,’ per se, her politics are muddled enough to not come across as a concerted middle finger to the left.” These are all compelling points! Read more

How the Origins of Policing Inform Demands to Defund Police. By Jeremy Scahill / The Intercept

As activists and some lawmakers ramp up campaigns to defund police in cities across the United States, it is important to analyze some broad historical questions about the mission and culture behind policing. Why do we have police in this country? Why are they organized, armed, and deployed in the ways that they are? How did police achieve so much political power? And how have police forces been used to defend the interests of the elite, crush organized labor, and reign terror on Black, brown, and poor communities? Read more

Related: Have Americans Warmed to Calls to ‘Defund the Police’? By Giovanni Russonello / NYT

Related: A Report From Occupied Territory: The law is meant to be my servant and not my master, still less my torturer and my murderer. By James Baldwin and Carrie Mae Weems / The Nation

To the World, We’re Now America the Racist and Pitiful. By Robin Wright / The New Yorker

On the eve of America’s anniversary—our two hundred and forty-fourth—much of the world believes that the country is racist, battered and bruised.  “Europe has long been suspicious—even jealous—of the way America has been able to pursue national wealth and power despite its deep social inequities,” Robin Niblett, the director of the Royal Institute of International Affairs, also known as Chatham House, in London, told me. Read more

Related: The National Humiliation We Need. By David Brooks / NYT

Related: How racism in US health system hinders care and costs lives of African Americans. By Tamika C. B. Zapolski and Ukamaka M. Oruche / The Conversation

The recent Black Lives Matter protests peaked on June 6, when half a million people turned out in nearly 550 places across the United States. That was a single day in more than a month of protests that still continue to today. Four recent polls — including one released this week by Civis Analytics, a data science firm that works with businesses and Democratic campaigns — suggest that about 15 million to 26 million people in the United States have participated in demonstrations over the death of George Floyd and others in recent weeks. These figures would make the recent protests the largest movement in the country’s history, according to interviews with scholars and crowd-counting experts. Read more

Related: Latinos Back Black Lives Matter Protests. They Want Change for Themselves, Too. By Jennifer Medina / NYT

What if we treated Confederate symbols the way we treated the defeated Nazis?  By John Semley / The Guardian

In Germany, you won’t hear debates about Nazi statues. As the moral philosopher Susan Neiman, author of Learning from the Germans: Race and the Memory of Evil, notes, there’s a good reason for that: there aren’t any Nazi statues. The program of denazification began almost immediately after the second world war, established as one of “Four Ds” (along with demilitarization, decentralization and democratization) outlined in the Potsdam agreement of 1945. An Allied order in 1946 declared illegal “any monument, memorial, poster, statue, edifice, street or highway name marker, emblem, tablet, or insignia which tends to preserve and keep alive the German military tradition, to revive militarism or to commemorate the Nazi Party.” Read more

Image of Thomas Jefferson alongside Black descendant holds ‘a mirror’ to America. By Sharmar Walters and Maia Davis / NBC News

Shannon LaNier, a ninth-generation descendant of Thomas Jefferson and his slave, Sally Hemings, wore the same sort of outfit as his famous ancestor for a Smithsonian Magazine article, “American Descendants.” But LaNier, who is Black, said in the article in the magazine’s July issue that he chose not to wear a wig for his likeness of his great-great-great-great-great-great-grandfather. Read more

The decades-long debate over the Oñate statue connects with current widespread protests calling for racial justice and the removal of statues of Confederate leaders. It has led many to ask: What should be done with statues honoring Spanish conquistadors and missionaries, and what do these statues represent for Latinos — whose ancestry includes this Spanish legacy? Read more

Where Do Black Journalists Go From Here? By Char Adams / New Republic

The current industry-wide revolt echoes demands made by members of the Black press since at least 1827, but today’s rebellion feels like a breaking point. Talking about the whiteness of the media isn’t anything new but, this time, feels different. Earlier this month, Black New York Times staffers organized a public campaign to denounce a racist op-ed calling for the use of military force against protesters. Read more

John Lewis is a man of herculean determination. His leadership, faith, and sense of humor are all put on display in Dawn Porter’s powerful and timely documentary “John Lewis: Good Trouble.” The film documents the life of a politician and civil rights leader who has never lost sight of his purpose even when faced with insurmountable odds. The title of the film comes from some advice Lewis likes to give: “When you see something that’s not right, not fine, say something, do something. Get in trouble: good trouble, necessary trouble.” Read more

Crisis in the Navajo Nation: Voter suppression, racism and a deadly pandemic. By David Daley / Salon

The Navajo Nation has been under lockdown the last two weekends as COVID-19 cases surged to dramatic highs across Arizona and Utah, potentially unraveling weeks of painstaking efforts to keep the virus spread contained. The pandemic has ravaged Navajo land. More people have died here than in 16 states, and the per capita death rate — a tragic toll of 177 per 100,000 residents — is higher than in any single American state. As outbreaks across Florida, Texas and elsewhere make national headlines, the virus rages here too, far from the national consciousness. Read more

The reckoning over representation: Black hollywood speaks out, but is the industry listening? By Variety / NBC News

What many in the entertainment industry are ready to say aloud is this: The institution itself is imbued with white supremacy and a patriarchal structure designed to proffer advantages unequally. Now the question is whether Hollywood, a town built on the very premise of exclusivity and gatekeeping, can make good on its commitment to inclusion — and amplify the voices of Black talent and other creatives of color the way it has purported to. Read more

The National Football League’s Washington Redskins are reviewing their racist team name, signaling that the derogatory slur could be on its way out for good. “In light of recent events around our country and feedback from our community, the Washington Redskins will undergo a thorough review of the team’s name,” the team said in a statement Friday. Read more

It is a truism that parents and guardians of black athletes whom college coaches are recruiting for football and basketball should be emboldened to appropriate right now: “Don’t Play Where You’re Not Respected.” In other words, don’t let your son labor for a college program that doesn’t support valuing black life. Read more