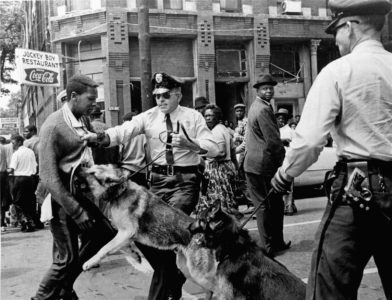 “The problem is the way policing was built,” historian Khalil Muhammad says. Muhammad’s work focuses on systemic racism and criminal justice; The Condemnation of Blackness deals with the idea of black criminality, which he defines as the process by which “people are assigned the label of criminal, whether they are guilty or not.” That process has been a vicious cycle in American history, Muhammad explains, wherein black people were arrested to prevent them from exercising their rights, then deemed dangerous because of their high arrest rates, which deprived them of their rights even further. Read more

What the Face of Emmett Till Says About Every Brutalized Black Body—Then and Now. By W. Ralph Eubanks / Vanity Fair

One of the times Americans witnessed a similar fracturing of the facade of white supremacy occurred in August of 1955, with the murder of Emmett Till. In today’s era of rampant police brutality against black men and women, the case of Emmett Till is worth examining for parallels with the present, for how that moment might guide us through these perilous times. Read more

Related: A 1946 lynching is still haunting us. By George Will / Wash Post

A ‘Glorious Poetic Rage.’ This time is different. Here’s why. By Jenna Wortham / NYT

In the wake of a perverse constellation of deaths of black Americans at the hands of the police and vigilantes, America’s current incarnation of a civil rights movement —organized under the rallying cry of “Black Lives Matter” — is more powerful than ever. The urgency and validity of the movement have finally been recognized, she told me, as the country has reached “its boiling point.”  Read more

Related: What Do the George Floyd Protesters Want?  The nationwide demonstrations could carry on for days or weeks—maybe even through November. By Elaine Godfrey / The Atlantic

The Police Are Rioting. We Need to Talk About It. It is an attack on civil society and democratic accountability. By Jamelle Bouie / NYT

If we’re going to speak of rioting protesters, then we need to speak of rioting police as well. No, they aren’t destroying property. But it is clear from news coverage, as well as countless videos taken by protesters and bystanders, that many officers are using often indiscriminate violence against people — against anyone, including the peaceful majority of demonstrators, who happens to be in the streets. Read more

‘Get Your Knee Off Our Necks.’ All that is needed for rebellion against relentless oppression is a spark. By Roger Cohen / NYT

“Get your knee off our necks,” is the Rev. Al Sharpton’s phrase for the uprising of 2020. The “knee” has been there for a while. It was in the Constitution’s three-fifths clause that set the census value of a slave at 60 percent of a free human being. The “knee” is slavery and Jim Crow and lynching and segregation in schools and transportation and neighborhoods and on and on and on through all the inflections of systemic state oppression of African-Americans that allowed Chauvin to believe he had the right as a white man to do what he did. Read more

‘Not being fully free’: The toll of everyday racism on black Americans. By Janell Ross / NBC News

One of the fundamental reasons for black America’s deep exhaustion is that the dangerous and humiliating encounters are not limited to contact with police.  “All that has happened recently is it’s become transparent to more people: the injustice, the lack of handling of human life with care,” Shipman said. Read more

The unemployment rate improved in May, but left black workers behind. By Katelyn Burns / Vox

As businesses around the United States begin to reopen amid the Covid-19-related economic collapse, the overall unemployment numbers in the US have improved, according to the Department of Labor’s May jobs report. But while the unemployment rate for most groups went down, it rose slightly for black Americans. Read more

Voting feels inadequate in our darkest moments. I recognize that. To say that the answer is to go cast a ballot feels not just inadequate, but also disrespectful. “Go vote” sounds like a slogan, not a solution. Because millions of us have voted. And too many still die. The moment requires many things of each one of us. What I am focused on is the work of showing people, in concrete ways, what voting gets us. And being honest about how much work voting requires. Read more

Colin Powell, former secretary of state under Republican President George W. Bush, said Sunday morning that President Donald Trump has “drifted away” from the Constitution and that he’ll be voting for Democratic nominee Joe Biden in the 2020 presidential election. Read more

Related: Why Mattis’ verdict on Trump is devastating. By Peter Bergen / CNN

Related: The president’s inhumanity is deeper than we knew.  By George T. Conway II / Wash Post

A history lesson for Trump: Lafayette Square was once bordered by ‘slave pens.’ By DeNeen Brown / Wash Post

Lafayette Square, where hundreds of protesters were cleared by force Monday night before President Trump’s walk to St. John’s Episcopal Church, was once bordered by “slave pens.” Hundreds of enslaved black people were held captive within sight of the White House. Lafayette Square was one of hundreds of sites in the United States where enslaved black people were sold during 250 years of slavery, according to the GSA. The nation’s capital was a major hub for the slave trade. Read more

Robert E. Lee is my ancestor. Take down his statue, and let his cause be lost. By Robert W. Lee IV

In the small town where I live and grew up, the Lost Cause of the Confederacy didn’t need a special name — it was the education we all received. We were taught that during the Civil War, the Confederate States of America had just motive. Perhaps you’ve heard the mantra: “The Civil War was fought for states’ rights.” It was enshrined in monuments across the country after the war ended. The catch is that there’s more to that sentence, something we southerners are never taught: The Civil War was fought for states’ rights to enslave African people in the United States of America. Read more

Related: With these racist markers in place, there can be no peace. By Karen L. Cox / CNN

“Go Back to the Neighborhood Where You Belong.” The viral anti–Black Lives Matter protests in Merrick, New York, stem from Long Island’s history of racist housing policy. By Rebecca Onion / Slate

Among the many viral videos of nationwide protests against police brutality this past week was a clip of a tense scene from Merrick, New York, a mostly white town on Long Island. On Tuesday, residents tried to block 100 Black Lives Matter protesters from marching down Route 27A, yelling “Get them the hell out of here!,” and suggesting that they be rerouted to march through a more diverse town nearby. Read more

Proximity to “Eurocentricity and whiteness is how our ancestors survived” through oppression, a painful legacy that still prevails and needs to be eradicated, Sanz said. White-presenting Latinos should use this time to “reconcile with the privilege” their light skin gives them in systems tainted with white supremacy and figure out ways to use it in a productive way. Read more

The image of then-Minneapolis police Officer Tou Thao, a Hmong American, standing with his back turned as a white officer knelt on George Floyd’s neck has ignited a discussion about how to approach the topic of anti-blackness in the Asian American community. Read more

Amy Coopers Are Everywhere. As a black educator, it’s appalling that I’ve been called by white co-workers to remove black students from class. By Rann Miller / The Progressive

I’ve worked with Amy Coopers. Over the course of my years in New Jersey public schools (six years teaching and four years in administration), I’ve gotten numerous calls from Amy Coopers to remove black boys from the classroom. I’ve witnessed Amy Coopers—who view young black men as a walking and talking threat—watch and do nothing as police officers assaulted a young black student with special needs. The police and the Amy Coopers of the world aren’t separate. They work in tandem. Read more

In a major reversal, NFL Commissioner Roger Goodell admitted on Friday that the organization was wrong for not allowing NFL players to peacefully protest police brutality against Black people during the national anthem. “We, the NFL, condemn racism and the systematic oppression of Black people,” Goodell said in a filmed statement posted to Twitter. Read more

Oprah Winfrey to Host ‘Where Do We Go From Here?’ Special With Black Thought Leaders. By Althea Legaspi / Rolling Stone

Oprah Winfrey will lead a conversation with black thought leaders, activists and artists next week called OWN Spotlight: Where Do We Go From Here?, Variety reports. The two-night special will air on the host’s OWN channel on June 9th and 10th at 9 p.m. ET and will also be simulcast across the network’s parent company Discovery’s 18 other networks. Read more