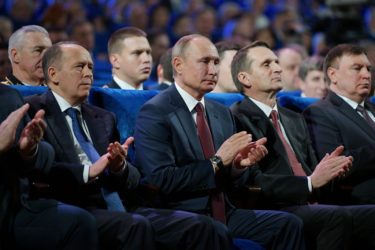 The Russian government has stepped up efforts to inflame racial tensions in the United States as part of its bid to influence November’s presidential election, including trying to incite violence by white supremacist groups and to stoke anger among African-Americans, according to seven American officials briefed on recent intelligence. Read more

Comment: Prepare for the Upcoming Civil War. By Bill Lueders / The Progressive

It has become one of the most urgent issues of our time, and the source of much consternation: Are we, as a nation, headed toward a civil war? Under Donald Trump, that’s a valid question. The President and his supporters are actively anticipating this possibility. Read more

To Beat Trump, a Woman of Color VP is More Than a Consolation Prize. It’s a Necessity. By Aimee Allison / Newsweek

Looking at the remaining two white men competing for the Democratic nomination to take on fellow white man President Donald Trump, I feel a familiar heartbreak. A grief known to many women of color whose brilliance is passed over, again and again, as we are told to wait our turn. Elizabeth Warren’s recent decision to suspend her campaign has compounded that tremendous sense of loss. But Democrats can’t win on grief. They need the enthusiasm of women of color like me to win. Without us, the country will suffer another four years of Trump. Read more  Also see,  Joe Biden Has Been Dropping Hints About his VP Pick

‘White men get to be the default’: Women lament Warren’s demise. By Laura Barron-Lopez / Politico

And then there were two white men in their late 70s. Elizabeth Warren’s exit from the presidential race has left Democrats, including those who supported or ran rival campaigns, evaluating how the party arrived at Joe Biden and Bernie Sanders as the last two candidates standing. Read more

Socialism appeals to many black voters. But that’s not helping Bernie. Here’s why. By John Blake / CNN

There is  arguably no group in America that should be more suspicious of unfettered capitalism than blacks. Slavery, for example, was driven as much by greed as racism. And blacks lost half  of their wealth due to the 2008 economic collapse. “You can’t have capitalism without racism,” Malcolm X once  said.  So as he seeks to blunt Biden’s momentum in Tuesday’s primaries,  why hasn’t Sanders been able to tap more into this black radical tradition? And why don’t more people know about it? Read more

People with high blood pressure could be at greater risk of dying from COVID-19, the disease caused by the new coronavirus, according to a doctor in China working on the outbreak. Professor Du Bin, who was sent to the city of Wuhan where the outbreak started in December last year, told Bloombergthat of a group of 170 patients who died in the city, almost half had the condition also known as hypertension. High blood pressure, which affects tens of millions of U.S. adults, means the heart must work harder to pump blood around the body. This is a risk factor for heart disease, heart attacks and strokes. Read more

With the outbreak of the novel coronavirus, Asian Americans are once again facing hostility during a global public health emergency. While Americans have been advised by experts and officials to prepare, not panic, we also see empty Chinatown restaurants across the country, flight cancellations and travel restrictions to and from China and other parts of Asia, Asian American children and students experiencing harassment and discrimination (something I was very familiar with during the SARS outbreak in 2003), insidious misinformation that can spread far more quickly and widely than the virus itself, and a top medical journal publishing a damaging viewpoint that speculates on biological differences among Asian males based on “unconfirmed data.” Read more

The history of slavery remains with us today. By Ariela Gross and Alejandro de la Fuente / Wash Post

Some have suggested that African American support of Joe Biden rests less on their trust in him, than on their distrust of white voters’ willingness to vote for a woman, a person of color or a progressive. This reasoning suggests that African American voters make pragmatic political choices based on an understanding of the persistence of anti-black racism in our society, sometimes settling for a white candidate who they think will be least objectionable to white voters while causing African Americans the least harm. To understand where we are today, we need to understand the deep roots of anti-black racism in the history of the Americas. Read more

Salon segregation is a dirty secret no one talks about, and unless you’ve experienced it, you might not know it exists. Although the beauty industry professes inclusiveness, stylists aren’t being trained in all hair types, including textured hair common among Black women. As a result, Black women cannot be expertly serviced in all salons. This is problematic, especially as the salon is a place dedicated to self-care, a place to be pampered and feel beautiful. Read more

How Hollywood Sees Me … And How I Want to Be Seen. By Haruka Sakaguchi and Griselda San Martin / Wash Post Mag

Since the dawn of Hollywood, nonwhite actors have been asked to play stereotypes — from maids to immigrants to thugs — while struggling to get cast in layered, authentic roles. In order to highlight this phenomenon, we decided to photograph actors in two ways: embodying the typecast roles that they have been asked to play and imagining the roles that they aspire to play. Read more

He Played With Charlie Parker. For $15 He’ll Play With You. By Sheila Mclear / NYT

For 46 years, students have crowded around Dr. Barry Harris for his weekly jazz class. The pianist, composer and teacher — he has four honorary Ph.D.s and so prefers to go by “Dr. Harris” — is the last of his breed: an interpreter of bebop in its purest form. Charlie Parker, Dizzy Gillespie, Bud Powell, Thelonious Monk — his more famous contemporaries, and his friends, died long ago.
Read more

The state of diversity and inclusion in NBA front offices. By Marc J. Spears / The Undefeated

The First African American Woman To Obtain A Graduate Degree In Physics Was Involved In A Top Secret US Mission. By Anna Powers / Forbes