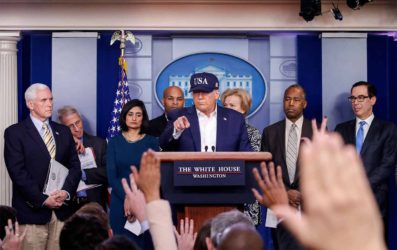 Featured – Prayer Will Not Stop the Coronavirus. By Rev. Dr. William J. Barber II and Jonathan Wilson Hartgrove / The Nation

When President Donald Trump, Vice President Mike Pence, and public health officials held a Saturday press conference on their plans to address the coronavirus, Secretary of Housing and Urban Development Ben Carson was a surprising addition to the line-up. Yes, Carson is a medical doctor. But his specialty was neurosurgery, not epidemiology. A public health crisis will certainly impact Americans who live in public housing and are housing insecure, but Carson did not address those issues either. Instead, he stepped to the microphone to celebrate Trump’s call for a National Day of Prayer Sunday. But America is not in trouble because people are not praying; we face an exacerbated public health crisis because this administration has spent more time preying on the most vulnerable than lifting all people. Read more  Also see, How it spreads, infects: Coronavirus impact comes into focus

Public health expert says African Americans are at greater risk of death from coronavirus. By Lonnae O’Neal / The Undefeated

For a whole host of economic, political and historical reasons, Georges C. Benjamin, executive director of the American Public Health Association, says it’s a threat that African Americans need to take particularly seriously. “We get a lot of misinformation circulating through our communities,” Benjamin said. “We fundamentally don’t trust some of the [non-black] institutions because they do not serve us well. We need to make sure our trusted institutions, clinicians of color, churches, community organizations, are better educated.” Read more

Nearly 500,000 People Who Have Not Been Convicted Are In Jail At High Coronavirus Risk. By Jessica Schulberg / HuffPost

Jails and prisons are high-risk environments for a coronavirus outbreak. At a time when public health officials are urging people to self-quarantine, practice social distancing and wash their hands frequently, people who are incarcerated typically don’t have those options. There are nearly half a million people incarcerated in the U.S. who have not been convicted of a crime but can’t afford to pay bail. They should be released to await their day in court, the American Civil Liberties Union said Thursday as the deadly coronavirus spreads throughout the country. Read more

What the name should not do, according to guidance issued by the World Health Organization in 2015, is use a specific region, country, ethnicity or animal. That’s because naming a virus after a place, for instance, creates fear and a stigma that make containing the disease difficult and can even put lives at risk. And yet, certain Washington, D.C., leaders are doing just that. Read more

As coronavirus disrupts the global landscape, some of the sobering questions about U.S. preparedness revolve around what we don’t have in place — health care for everyone, affordable child care and paid leave, and basic benefits for the nation’s poorest families. In his timely and provocative new book, “American Poison: How Racial Hostility Destroyed Our Promise,” to be released next Tuesday (March 17), New York Times economics reporter Eduardo Porter argues there’s a pretty simple reason why the country is an exception among industrialized countries when it comes to a lack of national safety nets — with “so many stories of people falling over the edge,” he tells NBC News, and intractable marginalization and poverty. Read more

In his quest to Make American Hate Again, President Donald Trump and his administration were planning to make life even worse for food-insecure families when the sought to proceed with measures to remove nearly three-quarters of a million people from Supplemental Nutrition Assistance Program (SNAP) benefits program. One of the good things to come out of the Coronavirus pandemic was Chief U.S. District Court Judge Beryl A. Howell ruling that the planned strict work requirements were unlawful and blocked the administration from proceeding with them. Read more

The answer is not very complicated: His campaign organized and prioritized outreach to Latinx communities. Mr. Sanders’s effective ground organization, led by the strategist Chuck Rocha, has taken a multimedia approach to engage with Latinx voters, including TV advertisements, digital media and mailers, along with canvassing. Read more

Why black voters broke for Biden: The “white working class” isn’t the center of the universe. By Chauncey DeVega / Salon

This obsession with TrumpLandia has created a form of myopia in which other Americans and their stories are routinely ignored by the mainstream news media. In turn, this leads to the mainstream news media being “surprised” again by political and social events that in many ways are so predictable. The events of Super Tuesday, and the way black voters (and other parts of the Democratic Party’s base) salvaged Joe Biden’s stumbling presidential campaign — and likely ended that of Bernie Sanders — is one such example. Read more

How Prison Changes Your Politics. By Nicole Lewis and Rachelle Hampton / Slate

Spending decades in prison could easily result in a total withdrawal from politics. But in a first-of-its-kind survey, the Marshall Project and Slate found that people who have spent more years behind bars are more politically aware than their peers who’ve been incarcerated for less than a year. Respondents with long sentences were more motivated to vote, more likely to change their political views, and more likely to discuss politics than those who had spent less time in prison. Read more

Alabama Gov. Kay Ivey (R) was answering a question about the novel coronavirus for a gaggle of reporters in Montgomery on Thursday, when a woman in a black baseball cap walked up and wedged herself between the politician and the journalists. “You killed my brother,” Pamela Woods said in a calm but forceful voice. The confrontation captured on film by the television reporters gathered for a 2020 Census kickoff event came one week after the state executed Nathaniel Woods, 43, convicted as an accomplice to the slaying of three police officers in 2004. Read more

Last year, Johnson Publishing Co., publisher of the magazines Ebony, Jet and other iconic African American periodicals, filed for bankruptcy, leaving the historic archive’s future up in the air. Shortly afterward, a consortium of foundations acquired the publisher for $30 million to donate the collection to the the Getty Research Institute and the Smithsonian Institution’s National Museum of African American History and Culture. Read more

“To require people to pretty much alter chemically or in some type of extreme way how their hair grows out of the head seems to me so beyond intrusive,” said Smith (D-Baltimore City). “In the 21st century, it shouldn’t be necessary to make those kind of accommodations so someone can see you as a human or as a professional.” Read more