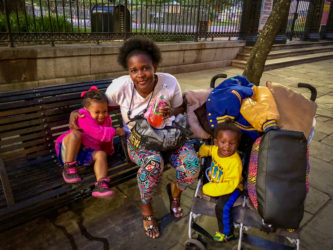 In societies where the virus hits, it is deepening the consequences of inequality, pushing many of the burdens onto the losers of today’s polarized economies and labor markets. Research suggests that those in lower economic strata are likelier to catch the disease. They are also likelier to die from it. And, even for those who remain healthy, they are likelier to suffer loss of income or health care as a result of quarantines and other measures, potentially on a sweeping scale. At the same time, inequality itself may be acting as a multiplier on the coronavirus’s spread and deadliness. Research on influenza has found that in an epidemic, poverty and inequality can exacerbate rates of transmission and mortality for everyone. Read more

During an NAACP emergency virtual town hall this week, former presidential candidate Sen. Kamala Harris, D-Calif., implored people of color to support a Senate bill that would provide paid sick leave for all workers during the coronavirus outbreak. “Two-thirds of low-income workers don’t have paid sick leave,” Harris said. “Forty percent of these workers are black or Latino. People shouldn’t have to choose between staying home and taking care of their babies.” Read more

Donald Trump, the coronavirus and the power of white privilege. By Chauncey DeVega / Salon

WHO officials warn US President Trump against calling coronavirus ‘the Chinese virus.’ By Dawn Kopecki / CNBC

“Viruses know no borders and they don’t care about your ethnicity, the color of your skin or how much money you have in the bank. So it’s really important we be careful in the language we use lest it lead to the profiling of individuals associated with the virus,” Dr. Mike Ryan, the executive director of WHO’s emergencies program, said at a news conference Wednesday when asked about Trump’s comments inciting violence against Asians. Read more

Confronting Anti-Asian Discrimination During the Coronavirus Crisis. By Ed Park / The New Yorker

I’m doing a Q. & A. event with an old friend, Cathy Park Hong, to help launch her new essay collection, “Minor Feelings,” which is subtitled “An Asian American Reckoning.” “Minor feelings” are the ones that Asian-Americans have—the ones that go unacknowledged because they exist outside the black/white racial binary. (During the Democratic debate in South Carolina the night before, for example, candidates brought up “the black vote” and “the white vote,” but I strained to catch any mention of an “Asian” vote.) Read more

Most pressing is the need for federal funding that can provide medical supplies and testing kits, said Jonathan Nez, the president of the Navajo Nation, the largest tribal reservation in the United States spanning the corners of Arizona, New Mexico and Utah. “We’re asking Congress to intervene to make sure that we get the funding we need,” Nez said. Read more

Utah Jazz Star Donovan Mitchell Provides an Update After Contracting the Coronavirus: ‘I’m Just Blessed to Be Able to Be OK.’  By Jay Connor / The Root

While we all might be dying a slow death without any professional sports for the foreseeable future, at least Jazz star Donovan Mitchell, who contracted the coronavirus from teammate Rudy Gobert, is recovering just fine. During a video interview with Good Morning America on Monday, the 23-year-old detailed his personal experience thus far and assured fans that “things are going well.” Read more

Delay or Hold Primaries: Can the 2020 Election Be Safeguarded Amid the Coronavirus Pandemic? By Amy Goodman / Democracy Now

Tuesday night’s primary election for the Democratic presidential nomination was marred by chaos, confusion and fears over the spread of coronavirus at polling places as former Vice President Joe Biden consolidated his lead as he won Florida and Illinois by a wide margin and scored a victory in Arizona. We are joined by Vanita Gupta, former head of the Justice Department’s Civil Rights Division in the Obama administration, now president of the Leadership Conference on Civil and Human Rights, the nation’s oldest and largest civil rights coalition. Read more

Trump Won’t Steal the Election, but Your Governor Might. By Elie Mystal / The Nation

There has been a lot of concern that President Donald Trump will use the coronavirus pandemic as an excuse to postpone or even “cancel” the federal election set for November 3, 2020. Let me allay that fear right now: He will not. He’s an authoritarian who disrespects the rule of law, so he might want to. But, thankfully, this isn’t his call. The date of the federal election can be changed only by an act of Congress. As long as Nancy Pelosi draws breath, we should expect to be voting on November 3. We are going to have an election. Unfortunately, just because we have an election doesn’t mean everybody will be allowed to vote in that election. Read more

What 10 Students Learned From Having To Say Their Worst Thoughts On Race Out Loud. By Hanna Rosin / NPR

The first time Judi Benson heard the unfiltered truth about race from a black person, she was 25 years old. It was 1973 and she was taking a class at the University of North Florida in Jacksonville called “Human Conflict: Black and White.” The class was radical for its time and place. In the early 1970’s Jacksonville, was still raw around civil rights — new to school busing, still struggling with desegregation in its jails. It was a city divided, with violent race riots in its recent history. There were 10 students in the class — five black, five white — and the professor, Peter Kranz. One of the first things he did was direct the students to go around the room and say what they really thought about people of the other race. Read more

When Harry Belafonte turned 93 on March 1, he celebrated with a tribute at the Apollo Theater in Harlem, which ended with a thunderous audience singalong to a riff on his star-making 1956 hit, “The Banana Boat Song,” complete with the rapper Doug E. Fresh beatboxing over its famous “Day-O!” refrain. It was a fitting salute at a building which Mr. Belafonte, in his 2011 memoir, called a “cathedral of spirituality.” But, just a few blocks uptown, he is receiving a quieter but no less momentous celebration. Read more

Ex-boxing superstar Floyd Mayweather earned over a staggering $800m across his illustrious fighting career. The 43-year-old American star retired with an unblemished record of 50 wins and no losses after his sensational crossover fight with Conor McGregor in 2017. Read more