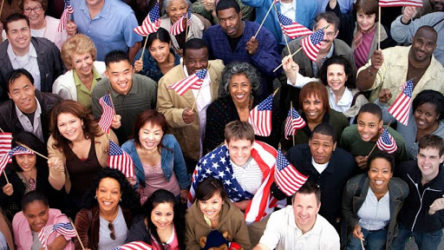 Featured – How the Pandemic Will End. By Ed Yong / The Atlantic

Aspects of America’s identity may need rethinking after COVID-19. Many of the country’s values have seemed to work against it during the pandemic. Its individualism, exceptionalism, and tendency to equate doing whatever you want with an act of resistance meant that when it came time to save lives and stay indoors, some people flocked to bars and clubs. Having internalized years of anti-terrorism messaging following 9/11, Americans resolved to not live in fear. But SARS-CoV-2 has no interest in their terror, only their cells. One could also envisage a future in which America learns a different lesson.  The election of November 2020 becomes a repudiation of “America first” politics. The nation pivots, as it did after World War II, from isolationism to international cooperation. Buoyed by steady investments and an influx of the brightest minds, the health-care workforce surges. Gen C kids write school essays about growing up to be epidemiologists. Public health becomes the centerpiece of foreign policy. The U.S. leads a new global partnership focused on solving challenges like pandemics and climate change. Must Read

Congress Reaches $2 Trillion Stimulus Package Deal. Here’s Everything You Really Need to Know About It. By Stephen A. Crockett Jr. / The Root

From this point on, the rest of our lives will be defined around coronavirus. Expect all of your father’s stories to have the phrase, “But that was way back before coronavirus fucked everything up.” To that end, Congress—the group of old white people who don’t really care about the people who voted them into office—stayed up into the wee hours of the morning hammering away at the finer points of a massive $2 trillion stimulus package that will do what all emergency bills always do whenever anything rocks America to its core: It will shore up big businesses and make sure that the rich don’t lose more money than they have to. Read more

Spit On, Yelled At, Attacked: Chinese-Americans Fear for Their Safety. By Sabrina Tavernise and Richard A. Oppel Jr. / NYT

As bigots blame them for the coronavirus and President Trump labels it the “Chinese virus,” many Chinese-Americans say they are terrified of what could come next. Read more  Also see, Call It ‘Coronavirus’

Lack of clean water and overcrowding leave Indian Country open to a “perfect storm” of health and economic crises during the pandemic. Shown is the the Wind River Indian Reservation in Ethete, Wyoming, on April 10, 2017. The Northern Arapaho tribe declared a state of emergency for the reservation after one of its members tested positive for Covid-19 on March 21, 2020.   Read more

Who is most at risk in the coronavirus crisis: 24 million of the lowest-income workers. By Beatrice Jin and Andrew McGill / Politico

Cashiers, nursing assistants, janitors, drivers, paramedics and more: These people are at highest risk of exposure to coronavirus — and make a median wage of less than $35,000 a year. This group, nearly 24 million people — or about 15 percent of the American workforce — is at the highest risk of suffering injury from the COVID-19 pandemic. Read more

Housing advocates say the situation in the United States reveals a bigger crisis with affordable housing that goes beyond the current virus emergency. And they have grave fears about what happens next, when tenants and homeowners face back payments and are still broke from being jobless. Read more

The absurdity of athletes taking on the burden of billionaires. By Martenzie Johnson / The Undefeated

As the rest of the country weathers a hurricane of inadequate health care, mass layoffs and food shortages at grocery stores, a corporation worth an estimated $2 billion considered docking the pay of some of its lowest-paid employees to soften the blow of projected financial losses. That is until Joel Embiid stepped in. On Tuesday, ESPN’s Ramona Shelburne reported that Embiid, the team’s star center, would be donating an undisclosed amount to Sixers employees whose salaries would be reduced during the suspension of the NBA regular season. Read more

As the COVID-19 crisis forces many schools to close their campuses and move all courses online, some worry that the pandemic could have a bigger negative impact on the nation’s historically black colleges and universities, than for other campuses. Here, The Conversation US has assembled a panel of experts to forecast what’s in store for HBCUs. Read more

In God We Divide. The political dimensions of worship have never been greater. By Thomas B. Edsall / NYT

A steady religious realignment has reshaped the white American electorate, turning religious conviction — or its absence — into a clear signal of where voters stand in the culture wars. As mainstream Protestant denominations have declined over the past half century, there has been a hollowing out of the center among white Christians of all faiths. New generations of Americans have joined the ranks of evangelical churches, while others, in larger numbers, have forsaken religion altogether. These two trends have transformed the strategic underpinnings of political campaigning. Read more

Former vice president Joe Biden, if he becomes the Democratic nominee, has committed to naming a woman as his running mate in the 2020 presidential election. Now, the question is which woman? The Democratic Party is filled with potential candidates, some of whom have been guests on my “Cape Up” podcast. Listen here

‘For Life’: How 50 Cent Helped One Man’s Tale of Injustice See Daylight. By Austin Considine / NYT

“You have a guy that survived nine assassin’s bullets to become one of the most influential entertainers and businessmen in the world,” observed Wright, who, like Jackson, is an executive producer of the series. “You have another guy that was sentenced to life in prison plus 70 years, represented himself, changed the law, got a police officer to confess that eventually gave him back his freedom.” Shown is Nicholas Pinnock, right, as Aaron, in a scene from “For Life.” Read more

“Hair can be freedom or bondage. The choice is yours,” Sarah Breedlove shouts to a growing crowd of black women as she shows off her homemade “hair grower” — palm-sized tins of hope — in the Netflix limited series “Self Made.” In the scene, Sarah isn’t yet Madam C.J. Walker: the first female African American millionaire who employed nearly 10,000 workers, owned bustling factories run by women and built a mansion next to John D. Rockefeller’s. But even without the fancy name, Sarah has vision and quickly emerges as the loudest voice in what we now know as the Great Conversation about black hair. Should it be straight? Natural? Judged? Touched? Left alone? Read more

‘Unworthy Republic’ Takes an Unflinching Look at Indian Removal in the 1830s. By Jennifer Szalai / NYT

The steamboat: For many Americans in the 19th century, it was a symbol of power and progress, a triumph of technology that ferried goods and people upriver with impressive speed. But for certain passengers, it represented something less glorious and more terrifying. In “Unworthy Republic,” the historian Claudio Saunt describes how the boats functioned as instruments of American expansion and — for the slaves and Indigenous people forced to travel on them — “as floating prisons.” The policy known as Indian Removal was signed into law by President Andrew Jackson in 1830. Transporting so many people up western rivers entailed squeezing them into cramped quarters, where diseases proliferated and a burst boiler could scald hundreds to death in an instant. Read more

The “Single Most Important DA Race in the Country” Is Headed to a Runoff. By Samantha Michaels / Mother Jones

The district attorney’s race in Los Angeles has been described by Black Lives Matter co-founder Patrisse Cullors as “the single most important DA race in the country.” It’s important not only because of the city’s size, but also because Los Angeles sees so many police shootings—more than almost anywhere else in the country—and because prosecutors at the district attorney’s office decide whether to press charges against cops who kill. Shown are District Attorney Jackie Lacey and former San Francisco District Attorney George Gascon, at a candidates’ debate in January. Read more