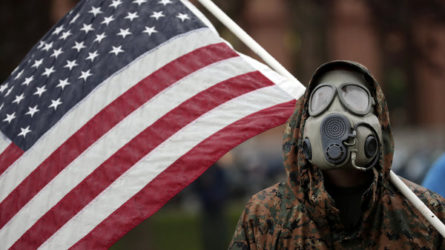 Featured – ‘Us Vs. Them’ In A Pandemic: Researchers Warn Divisions Could Get Dangerous. By Hannah Allam / NPR

As the pandemic moves from public health crisis to partisan flashpoint, the debate over the coronavirus response in the U.S. is becoming increasingly nasty – and, in some cases, violent. It’s not just the clusters of gun-toting protesters at state capitols. In sporadic incidents across the country, disputes over emergency measures have turned into shootings, fistfights and beatings. Stories abound of intimidation over masking. And armed right-wing groups have threatened contact tracers and people who they say “snitch” on neighbors and businesses violating health orders. “If we don’t intervene as a nation, as citizens, to begin to correct this identity-based polarization, then the erosion of democratic norms will go even further. Read more

Related: The ‘American Way of Life’ Is Shaping Up to Be a Battleground. By Keenga-Yamatta Taylor / NYT

The racially disproportionate effect of the Covid-19 crisis in this country and a recent rash of high-profile senseless killings of black people by the police and vigilantes may seem on their face unrelated. But, in fact, they are related. The two phenomena have collided as a tragic reminder of how consistently and continuously states have failed black people in this country. Read more

Related: Racial battle fatigue and the pandemic: A modern-day lynching in Georgia. By Chauncey DeVega / Salon

The Coronavirus and The Cities We Need. By The Editorial Board / NYT

American cities were the hammering engines of the nation’s economic progress, the showcases of its wealth and culture, the objects of global fascination, admiration and aspiration. They were also deformed by racism, bled by the profiteering of elites and fouled by pollution and disease. But in their best moments, they offered the chance to slip the bonds of prejudices, second-guessing and limited horizons. They offered opportunity. Then, cities worked. Now, they don’t. Read more

ON MAY 1, the Centers for Disease Control and Prevention published a report that outlined how coronavirus spread in the U.S. via European travel to the New York metropolitan area, despite a popular narrative that China was the main conduit for the disease. So why was the U.S. quick to halt flights from China, but slow when it came to Europe? Read more

Former President Barack Obama tore into the failed pandemic response by President Donald Trump’s administration in a college commencement address on Saturday. Obama spoke to the class of 2020 of the 74 historically black colleges and universities across the United States as part of a two-hour video event. He also addressed communities of color that are disproportionally affected by the deadly coronavirus disease. Read more

The real reason Trump wants to reopen the economy. By Robert Reich / Salon

Donald Trump is getting nervous. Internal polls show him losing in November unless the economy comes roaring back. So what is Trump’s reelection strategy? Ignore the warnings of public health experts and reopen the economy at all costs.  Here’s his lethal 4-part plan: Read more

Related: Return To Work Reveals There’s Nothing Equal About the Coronavirus Pandemic. By Sasha Belensky / HuffPost

36 Million People Are Unemployed and the Trump Administration Is Still Trying to Cut Food Stamps. By Nathalie Baptiste / Mother Jones

Last December, the US Department of Agriculture proposed a federal rule that would remove 700,000 people from the Supplemental Nutrition Assistance Program slated to go into effect in April. The new rule tied even more stringent work requirements to receiving food assistance. Citing the pandemic, a federal judge halted the rule change, but this week Trump administration filed an appeal in federal court. Read more

The first day of coronavirus testing at Bethany Baptist Church, a historic Black congregation in Brooklyn, New York, got off to a slow start. About 130 people showed up Wednesday for diagnostic tests at the temporary testing site, according to Rev. Adolphus C. Lacey. But by the next day, a socially distanced line stretched down the block outside the church half an hour before the site opened, Lacey said. More than 400 people signed up for antibody testing on Thursday, he said. Read more

Joe Biden Needs Black Women Voters. They Have a New Message for Him. By Jamilah King / Mother Jones

Since Black voters in South Carolina propelled Joe Biden to a comeback victory a few months ago, there has been a big looming question: How can Biden increase his appeal to young progressive Black voters—particularly women—who overwhelmingly backed rivals like Bernie Sanders and Elizabeth Warren? Read more

What comes after reparations. The story of Rosewood, Florida. Wash Post Podcast

In 1923, a white mob burned down the small mill town of Rosewood, Fla., killing at least six people and driving out black residents. After survivors won reparations from the state, Rosewood descendants are left with a complicated legacy. How a scholarship helped — and didn’t help — descendants of victims of the 1923 Rosewood racial massacre. Listen here

The U.S. Commission on Civil Rights has agreed to demands from a group of Senate Democrats who called on the agency to take “robust” action against increased acts of racism toward Asians. In a document first sent to NBC Asian America, the commission told lawmakers that it had voted unanimously to address anti-Asian racism and xenophobia amid the pandemic and issue guidance to federal agencies on how to prevent it. Read more

The West is relevant to our long history of anti-blackness, not just the South. By Walter Johnson / Wash Post

Two hundred years ago, Northern and Southern politicians came together to sign the Missouri Compromise. The bill, which admitted Missouri to the union as a slave state, Maine as a “free” state, and drew a line to the Pacific at 36 degrees 30 minutes (the Southern boundary of Missouri) that was intended to divide slavery from “freedom” forever after, is generally and properly considered a milestone on the pathway toward the Civil War and the conflict over slavery. But popular memory has forgotten that it did even more than that. Read more

Director Erika Cohn’s new film, Belly of the Beast, part of the Human Rights Watch Film Festival which goes digital in the U.S. from June 11 to 20, brings to the fore the undeniable and continued legacy of eugenics and forced sterilization in the state of California. Read more

“Basketball County: In The Water,” a 51-minute documentary produced by Durant’s Thirty Five Ventures and Showtime, explores how and why Prince George’s County has evolved into a basketball hotbed. Filmmakers John Beckham and Jimmy Jenkins trace the area’s history and key basketball developments, noting that an extensive system of public parks and recreational centers provided safety and structure for a generation of athletes, including 25 NBA players since 2000. Read more

Louis Delsarte, a Muralist of the Black Experience, Dies at 75. By Steven Kurutz / NYT

Born and raised in Brooklyn, Mr. Delsarte created monumental murals throughout New York City. Among his best-known pieces is a 20-foot-long mosaic, “Transitions,” installed in 2001 inside the Church Avenue subway station in the East Flatbush section of Brooklyn. Shown is his mural “Transitions.” Read more