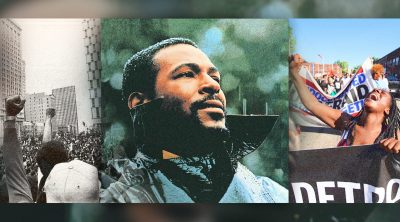 Ffty years ago this summer, vibrating with agitation and energy, Marvin Gaye headed down the wood steps into a Detroit studio and made his anthem for the ages. “What’s Going On,” a poignant musical masterpiece crafted in a season of unease, persists as a timely backdrop to another heated summer, half a century later, when the world feels upside down. Racial tensions, police controversy, environmental anxieties, a globe on edge — they were the topics on the front burner when Gaye rebooted his musical career and took control of his creative vision inside Motown. Read more   While we encourage you to listen to the entire album in these “troubled times,” we offer two favorites here, “Whats Going On” and “Wholy Holy.”

Related: Black Americans head to the polls having endured a year of tragedy and change. By Michael A Fletcher / The Undefeated 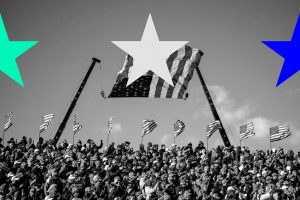 Be Ready for a Lengthy, Vicious Struggle. By Thomas B. Edsall / NYT

Larry Bartels, a political scientist at Vanderbilt, is focused on a long-term issue: the partisan consequences of rising levels of racial and ethnic animosity. On Aug. 31, Bartels published “Ethnic antagonism erodes Republicans’ commitment to democracy,” a report based on a January 2020 survey of 1,151 Republican identifiers and Republican-leaning Independents. Bartels reports that: Most Republicans in a January 2020 survey agreed that “the traditional American way of life is disappearing so fast that we may have to use force to save it.” Read more

Related: American democracy is in great danger — it’s the biggest news story of our time. By Dan Froomkin / Salon

Related: There Was a Loser Last Night. It Was America. By Thomas L. Frieman / NYT

Related: There Will Be No Emphatic Rejection of Trump. By Walter Shapiro / The New Republic 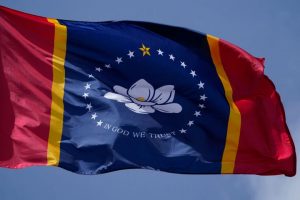 Mississippi Just Dumped Its Confederate-Themed Flag For This One. By Ed Mazza / HuffPost

Mississippi voters approved a new flag on Tuesday, replacing one that prominently featured a Confederate battle emblem. The new flag features a magnolia ― the state flower ― along with 20 white stars, a nod to Mississippi being the 20th state to enter the union. It also has a single gold star at the top representing the indigenous tribes, along with the legend “In God We Trust” below the magnolia: Read more 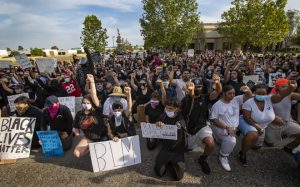 Editorial: So much for California’s racial reckoning. Voters reject affirmative action – again. By The Editorial Board / LA Times

Despite a summer of racial reckoning, when Californians marched in the streets to demand justice and equality, voters decided Tuesday not to help dismantle the racism baked into our state institutions. It wasn’t a close call, either; Proposition 16, a measure that would have removed a 24-year-old prohibition on affirmative action by state and local agencies, was rejected by more than 1 million votes. What a shame, and what a missed opportunity. It’s a reminder too that while California is often viewed as a progressive bastion, the state and its electorate are still fairly conservative when it comes to confronting racial inequity. Read more 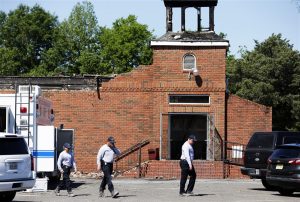 A Louisiana man was sentenced to 25 years in prison Monday for setting fire to three historically Black churches, federal prosecutors said. Holden Matthews, 23, in February pleaded guilty to setting fire to the Baptist churches in spring 2019 and said he did it to boost his profile in the “black metal” community, the Justice Department said. Read more 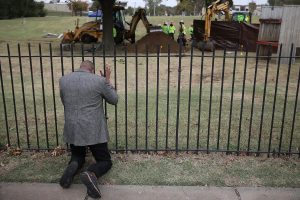 We must do more to honor the people and places lost to violent racism. By Walter Greason / Wash Post

Only recently has the United States chosen to love Black people. It has loved the Confederacy deeper and longer and with greater loyalty. Stone Mountain spits in the face of our supposed destiny: How deeply must a nation hate a people to carve their destroyers into the landscape in perpetuity? Rev. Robert Turner, with Vernon A.M.E Church, prays as crews search for remains from the 1921 Tulsa Race Massacre at Oaklawn Cemetery in Tulsa on Oct 20.   Read more 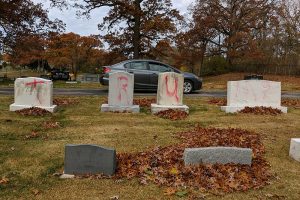 The Anti-Defamation League (ADL) of Michigan said on Monday that several tombstones in the Ahavas Israel Cemetery in Grand Rapids had been desecrated with “Trump” and “MAGA” in red spray paint. The civil rights organization tweeted several photos that showed the spray paint on tombstones. The incident is believed to have taken place over the weekend. The cemetery is owned by the Ahavas Israel Congregation. Read more 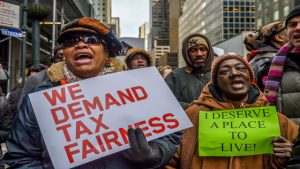 Systemic racism has kept the U.S. from reaching its full economic potential, according to a growing body of research. A recent Citigroup study estimated that financial, educational and other inequities between Black and White Americans cost the U.S. a staggering $16 trillion. CBS MoneyWatch spoke with Dana Peterson — formerly global economist at Citigroup, now chief economist for The Conference Board and the lead researcher behind the study — about its findings. This interview has been edited for length and clarity. Read more 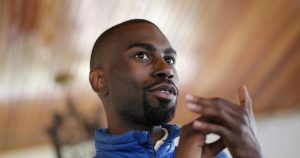 At the Baton Rouge protest, a police officer identified in court papers only as John Doe was struck by a projectile thrown by someone in the crowd. The officer suffered serious injuries, including to his brain. He sued Mckesson, even though he did not accuse the activist of throwing the “rock-like” object or even knowing who did. The officer alleged Mckesson was liable because he should have known violence would result because of the protest. Read more 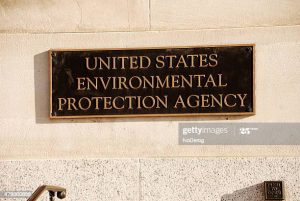 Environmental Protection Agency staffers are organizing against President Donald Trump’s recent executive order banning diversity trainings, mounting what may be the fiercest opposition to Trump administration policy from within to date. By Monday morning, at least 80 employees in the agency’s Office of General Counsel ― more than one-third of staffers there ― signed on to a statement warning that Trump’s move will “result in further institutionalizing racism in the federal government” and “fly in the face of freedom of speech under the First Amendment,” according to a copy of the letter HuffPost obtained. Combined, the signatories represent more than 1,000 years of service to the agency. Read more 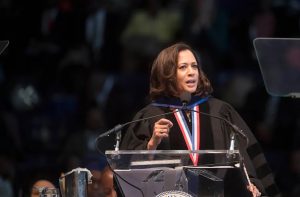 As Sen. Kamala D. Harris descended on the final stops in her vice-presidential campaign, her alma mater in the nation’s capital reflected on her historic race to the White House. The wind ripped at a banner with the senator’s face, an image taken when she delivered Howard University’s commencement address in 2017. Guests wrote messages of congratulations on a big white card. Read more 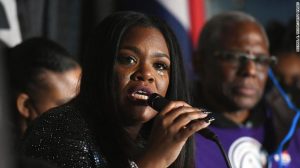 Reënacting the Trial of a Black Woman Convicted of Voter Fraud. By Vinson Cunningham / The New Yorker

Just about four years ago, on Election Day, 2016, a woman named Crystal Mason went to her local polling place, in Rendon, Texas, to vote. She couldn’t find her name on the rolls, and so, with the help of a volunteer poll worker, she filled out a provisional ballot. That’s a sequence too common for drama; many of us will experience it this election. But Mason had recently returned home after more than two years in prison. “Why Would I Dare: The Trial of Crystal Mason,” a reading directed by Tyler Thomas, presented by the Commissary, Rattlestick Playwrights Theatre, and New Neighborhood, is a straightforward virtual reënactment of the trial to convict Mason. Read more 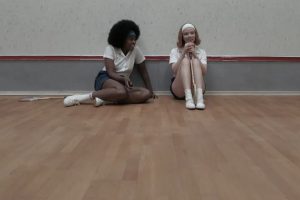 ‘The Queen’s Gambit’ is mesmerizing, but there’s one glaring problem. By Bethonie Butler / Wash Post

Toward the end of “The Queen’s Gambit,” chess prodigy Beth Harmon (Anya Taylor-Joy) gets an unexpected visit from an old friend. It’s exciting to see Beth reunite with Jolene, the Black woman whom she befriended when they were kids at a Kentucky orphanage for girls, but the ensuing scenes veer into an unsettling trope. Read more 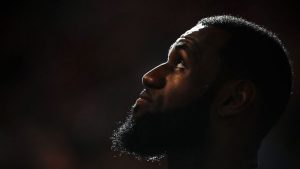 President Trump has taken a few shots at the NBA in recent weeks, and at LeBron James in particular. Trump threw another jab at the Los Angeles Lakers star during a campaign rally Monday in Pennsylvania, and he basked in his audience’s chants of “LeBron James sucks!” During an appearance in Scranton, Trump was claiming that, thanks to him, news networks are “getting the highest ratings in the history of television” when he segued to one of his favorite talking points: that the protests of racial injustice during the national anthem by players in the NBA and NFL have, in his view, badly damaged the popularity of those leagues. Read more