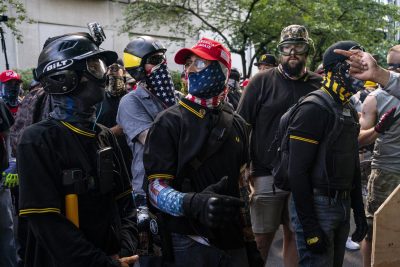 When asked to directly disavow white supremacists on Tuesday night at the first presidential debate, President Donald Trump—yet again—did not do so. Instead, his dodging provoked a flurry of online celebration by far-right extremists who saw it as implicit approval and pledged their allegiance to him. The Trump Administration has come under fire for repeatedly downplaying the threat of white nationalist violence and inflating the threat posed by left-wing agitators—including by whistleblowers from inside the Department of Homeland Security. Read more

Related: White Mob Violence Is Back Thanks to Trump. By John Feffer / The Nation 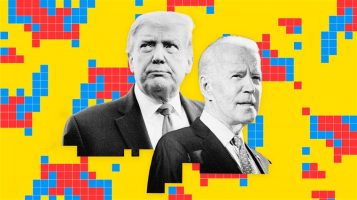 Demographic shifts since 2016 could be enough to defeat Trump. But it’s complicated. By David Wasserman / NBC News

Four years ago, President Donald Trump lost the popular vote by 2.9 million votes and still won the White House thanks to a near-perfect geographic vote distribution that allowed him to capture big Electoral College prizes by razor-thin margins. The key? Trump’s unprecedented 37-point margin among white voters without four-year college degrees, who are especially influential in the upper Midwest. But as the U.S. becomes more diverse and college-educated, Trump’s core demographic is steadily declining. In 2020, noncollege whites are on track to make up about 43 percent of the nation’s adult citizens, down from 46 percent in 2016. Read more

Related: The racist anti-vote effort by Florida Republicans hits a new low. By The Editorial Board / Wash Post 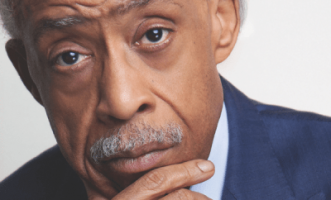 The Rev. Al Sharpton discusses why it is imperative to ‘Rise Up’ in this moment. By Jonathan Capehart / Cape Up Podcast – Wash Post

The activist and minister talks about the themes in his latest book, “Rise Up: Confronting a Country at the Crossroads,” including latte liberals and toxic masculinity. Listen here

Related: Rev. Al Sharpton on Trump, Biden and America: “This is a hard test for the country.” By Chauncey DeVega / Salon 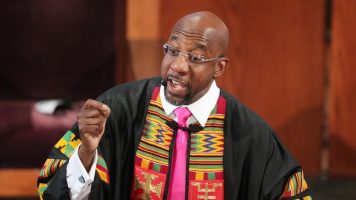 Democratic candidate Raphael Warnock leads the field for Georgia’s special Senate election in a Quinnipiac poll released Tuesday. The poll found Warnock with 31 percent, ahead of Sen. Kelly Loeffler (R) with 23 percent, Rep. Doug Collins (R) with 22 percent and Democratic candidate Matt Lieberman with 9 percent. It is the first major poll to show Warnock leading, as other surveys have had Collins or Loeffler ahead. Read more 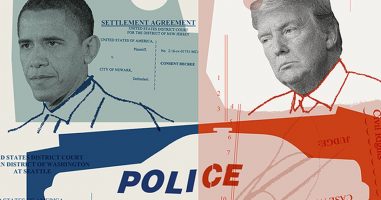 The Obama Justice Department Had a Plan to Hold Police Accountable for Abuses. The Trump DOJ Has Undermined It.  By Robert Faturechi / Propublica

In Seattle and jurisdictions across the country, the Trump administration’s Department of Justice has pulled back on policing the police. It has not entered into a single new consent decree with any law enforcement agency suspected of systemic abuses of constitutional rights. It has only announced the completion of one investigation into such abuses. Read more 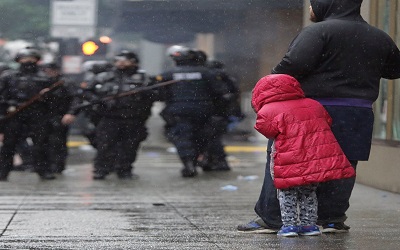 Kids’ perceptions of police fall as they age – for Black children the decline starts earlier and is constant. By Kathleen Padilia and Adam Fine / The Conversation

Across racial and ethnic groups, youths’ perceptions of police have dropped in recent years to a decades-long low. Yet, the amount of the decline differs across demographic groups. In fact, Black youth report the most dramatic declines, and the gap between their perceptions and white youths’ perceptions has been increasing. Read more 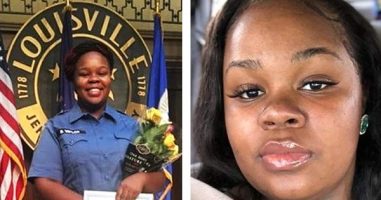 Breonna Taylor’s death: How a 26-year-old Black woman was killed by police. By NBC Video

Breonna Taylor had high hopes for 2020. On March 12th, she had dinner out with her long-time boyfriend before they returned to her Louisville apartment. She fell asleep in front of the TV. Just after midnight, everything changed. Amid mounting pressure to prosecute the officers who opened fire that March night, a visual investigation by NBC News pulls together the evidence to reveal what we know — and what we don’t — about how a botched police raid left Breonna Taylor — a woman with no criminal history — dead, her partner accused of attempted murder of a police officer and America up in arms. Watch here 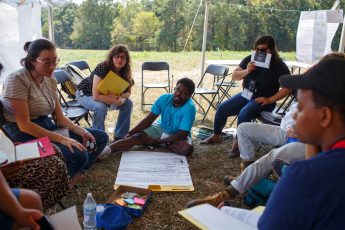 In the wake of this year’s nationwide protests against institutional racism — sparked by George Floyd’s killing in Minnesota — Black Appalachians have found an opportunity for their history and struggles to be recognized more widely. Though the national reckoning on racism has raised awareness about the issue for many white Americans, that it is also echoing in the hills of Appalachia is particularly striking in a region that isn’t known for its diversity. Read more 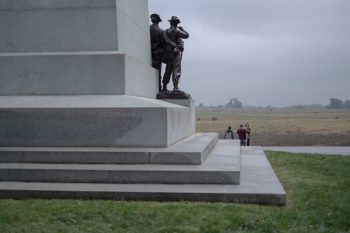 Amid the Monument Wars, a Rally for ‘More History.’ By Jennifer Schuessler / NYT

On Saturday, a group of about 30 mustered under drizzly skies at the edge of the battlefield at Gettysburg, Pa. The site of one of the bloodiest and most important battles of the Civil War, Gettysburg has seen its share of clashes over the memory of the war in recent years. But this group was there to make a stand of a different kind. They carried signs with quotations from 19th-century newspapers, passages from the Confederacy’s constitution extolling slavery, and facts (some of them footnoted) about Robert E. Lee’s treatment of his human property. Some in the group wore T-shirts emblazoned with a social media-ready battle cry: #wewantmorehistory. Read more

Related: A Counter to Confederate Monuments, Black Cemeteries Tell a Fuller Story of the South. By Kirk Johnson / NYT 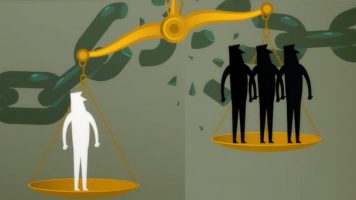 What America owes: How reparations would look and who would pay.  Samara Lynn and Catherine Thorbecke / ABC News

In the early 20th century, Richard Givens, a Black man, toiled as a laborer in a box mill in Greensville County, Virginia. He earned $300 for the entire year in 1939, according to U.S. Census records, an income Givens had to use to support a family of eight. That seemingly paltry sum (worth only approximately $5,500 today) was even anemic for the time — less than the median salary for non-white men ($460) and about a quarter of what white men made at the time ($1,112), according to data from the U.S. Department of Commerce, Bureau of the Census. Read more

Related: Wealth gaps between Black and White families persisted even at the height of the economic expansion. By Rachel Siegel / Wash Post 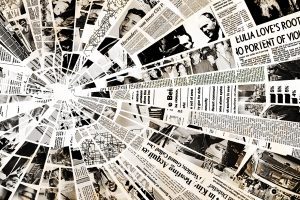 L.A. Times apology during a season of reflection. By The Times Editorial Board

As the country grapples with the role of systemic racism, The Times has committed to examining its past. This project looks at our treatment of people of color — outside and inside the newsroom — throughout our nearly 139-year history. Read more

THE FIRSTS: The children who desegregated America. A Special project from The Atlantic.

In 1954, the Supreme Court decided that segregation of public schools was unconstitutional—but it was thousands of children who actually desegregated America’s classrooms. The task that fell to them was a brutal one. Those kids are in their 50s, 60s, 70s, and 80s now. Many of them are no longer with us. But those who are have stories to tell. Read more 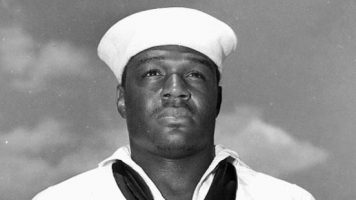 A Military 1st: A Supercarrier Is Named After An African American Sailor. By Jay Price / NPR

A supercarrier now on the drawing boards will be christened the USS Doris Miller. It’s the first supercarrier to be named for an enlisted sailor and the first to be named after an African American. Most supercarriers are named for U.S. presidents — the USS John F. Kennedy. USS Ronald Reagan. USS Abraham Lincoln. Henry Kissinger called them “100,000 tons of diplomacy,” and that power has long been reflected in the Navy’s conventions for naming them. Doris Miller, who went by “Dorie” in the Navy, was one of the first American heroes of World War II. Read more 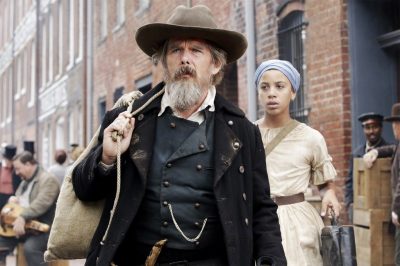 Hawke developed the series for television with writer- showrunner Mark Richard, and the pair co-wrote its first and last episodes. Based on the novel by James McBride, the story is told from Onion’s point of view, ending with the botched raid on Harper’s Ferry—which spans three of the show’s seven episodes. Johnson, as Onion, is an ideal narrator. His life is made up of the complications and gray areas that John Brown can’t always appreciate—like what the formerly enslaved are supposed to do once freed in a nation hostile to them; how a population denied education and resources is supposed to fend for themselves in the growing American economy. Yet as Onion rebels against Brown’s handling of “Henrietta,” he falls for the preacher’s fierce rhetoric. Read more 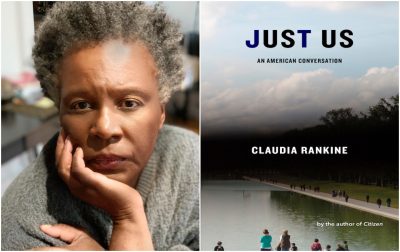 Claudia Rankine Wants Us to Talk. By Nawal Arjini / The Nation

Claudia Rankine’s latest unsettling of American racial discourse is Just Us: An American Conversation, a book of reflections on her encounters with whiteness as it manifests in friends, therapists, students, and passersby. Rankine, who teaches poetry at Yale and is also a playwright, most recently of The White Card, has been interested for decades in the language we use to build our identities. Just Us is a close reading of the way we talk, write, and think about race. Read more 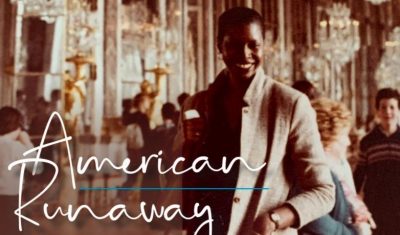 In this rich collection of essays, cultural and political commentary, and personal “race stories,” an African American runaway of a certain age and wiseass perspective takes aim at America in its twilight—the Donald Trump years. And rediscovers as a self-liberated woman the magic that has always been Paris. Read more 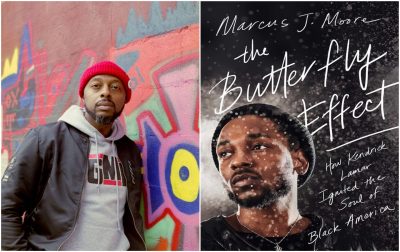 How Kendrick Lamar Became the Voice of a Generation. By Ann-Derrick Gaillot / The Nation

“Compton—and Los Angeles as a whole—was chock-full of great lyricists with something viable to say,” Marcus Moore writes about rapper Kendrick Lamar’s hometown, “so what made Kendrick the one to rise above it all?” It’s a question at the heart of his new book, The Butterfly Effect: How Kendrick Lamar Ignited the Soul of Black America, out in October, and one Moore uses to guide readers through wider discussions of artistic achievement and what it means to be the voice of a generation. Read more 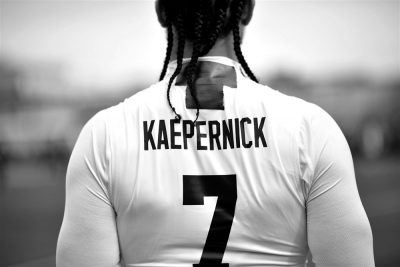 On Sept. 22, the Denver Broncos’ signed free-agent quarterback Blake Bortles to a one-year contract after unproven starter Drew Lock injured his right rotator cuff. What does this tell us? It shows, for one thing, that the Broncos are in trouble this season. But it also proves the NFL is still blackballing former Super Bowl-starting quarterback Colin Kaepernick. Why else would Kaepernick not even merit a tryout from the Broncos? Why sign Bortles, the former third overall pick in the 2013 draft, who spent six seasons as a bust for the Jacksonville Jaguars and last year attempted three passes in two games as Jared Goff’s backup with the Los Angeles Rams? Read more