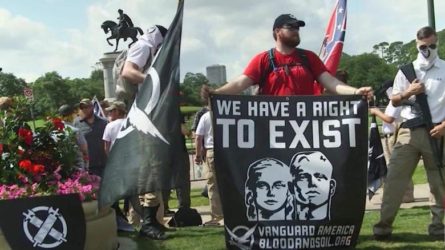 Featured – I traveled the American South looking for a way to solve racial divisions. By Mitch Landrieu / CNN

One of the major challenges is that many white people lack an understanding of the scale of racism in America, including our racial history and how it still permeates today’s institutions. As a result, racism is often too narrowly defined as overt individual actions rather than systemic injustices. There is very little recognition among white Southerners that the playing field has been tilted toward them in a way that has provided significant socioeconomic advantages and privilege over the course of generations. Read more

How Do the Trumpists Mobilize? Around White Nationalism and Anti-Semitism. By Sasha Abramsky / The Nation

As Trump rants about “human scum” who oppose him, Political Research Associates, a Boston-based think tank that monitors domestic right-wing extremism, has released a report, in collaboration with Bend the Arc, timed to mark the first anniversary of the Tree of Life synagogue massacre in Pittsburgh last October, on the surging power of white nationalism and anti-Semitic narratives in Trump’s America. Read more

The polling data couldn’t make it more clear that the white people who are finally moving away from supporting Trump are college-educated—not the working-class whites that many Democrats and reporters obsess over. Read more

In Judaism, the anniversary of the death of a loved one is called a yahrzeit, and the first yahrzeit is a particularly important time to both mourn and reflect. A year ago Sunday, a white supremacist obsessed with an anti-Semitic conspiracy theory gunned down 11 worshippers at the Tree of Life, a Pittsburgh synagogue. On these victims’ yahrzeit, it behooves us to not only mourn their loss but also to ask whether we’ve ensured that their deaths weren’t in vain. Read more  Also see, What Jews think about anti-Semitism

Having campaigned and governed as an avatar of embattled whiteness, Donald Trump did the inevitable on Tuesday and compared the lawful impeachment inquiry into his administration to a “lynching.” This was met with immediate ire from people who know something about lynching’s dreadful history. Kristen Clarke, executive director of the Lawyers’ Committee for Civil Rights Under Law, tweeted that she was “sickened to see Trump’s gross misappropriation of this term today.” Read more

Joining me today on the podcast is Georgetown Law Professor, Paul Butler. As you may recall, Paul joined me on the day we launched Crime Story to offer his perspective on my interview with Attorney General William Barr. Professor Butler is the author of the widely lauded books “Let’s Get Free: A Hip-Hop Theory of Justice,” and “Chokehold: Policing Black Men.” Paul is also one of the nation’s most frequently consulted scholars on issues of race and criminal justice. Prior to becoming a professor, Butler served as a federal prosecutor with the U.S. Department of Justice. Listen here

Democratic presidential candidate Kamala Harris on Saturday rejoined a criminal justice forum she had pulled out from a day earlier at a historically black college in South Carolina following the removal of a sponsor that had given President Donald Trump a “Bipartisan Justice Award.” Read more

What Holocaust Restitution Taught Me About Slavery Reparations. By Stuart E. Eizenstat / Politico

Over the past few years, the idea of reparations for the effects of slavery in the United States has gone from a mostly academic discussion to a political possibility, discussed at presidential debates and in the halls of Congress. But reparations in the form of cash payments for descendants of slaves are not the way to right this grievous wrong. Read more

Maya Rockeymoore-Cummings, the wife of Rep. Elijah Cummings, said the congressman’s work became harder toward the end of his life as he sustained personal attacks against himself and the city of Baltimore, which he served. “While he carried himself with grace and dignity in all public forums, it hurt him,” Rockeymoore-Cummings said in a passionate speech at her husband’s funeral. Watch here

Their School Integrated But Racial Divisions Remained: ‘We Missed Knowing Each Other.’ By Camila Kerwin and Emma Bowman / NPR

Eli Brown and Natalie Guice Adams first met as third-grade classmates, when their school in Winnsboro, La., integrated in fall of 1970. Although they would share a similar academic trajectory, Brown and Adams lived very separate experiences. Read more

The New Documentary About Meghan and Harry Is a Lot More Complicated Than Those Viral Clips Suggest. By Rachelle Hampton / Slate

Last week, British television network ITV News tweeted out a clip of Meghan, the Duchess of Sussex that took the internet by storm. When journalist Tom Bradby inquired about Meghan’s physical and mental health postpartum in the midst of aggressive media scrutiny, she seemed to be on the verge of tears. “Thank you for asking because not many people have asked if I’m OK,” she said. The video was an excerpt from the ITV documentary Harry & Meghan: An African Journey, which debuted Sunday night in the U.K. and airs Wednesday night on ABC. Read more

Kanye has a new album, but he isn’t worth our time anymore. By David Dennis Jr. / The Undefeated

We don’t owe Kanye our time anymore and it’s totally fine to skip out on his latest project, Jesus Is King and the circus Mr. West brings with it. A circus that now includes multiple pushbacks, false starts and an October 25th midnight release that still hasn’t materialized. Read more

Tubman led at least 70 enslaved friends and family from Maryland to freedom over 13 trips on the Underground Railroad. By Janelle Richards / NBC News

Prince’s Memoir, ‘The Beautiful Ones,’ Is A Brief But Compelling Affirmation Of His Blackness. By Erica Thompson / HuffPost

The memoir is divided into five sections, beginning with an introduction that provides a behind-the-scenes look at its creation. A large part of this section was previously published in The New Yorker, but there are new passages that readers should examine closely; Piepen bring’s conversations with Prince are just as important as the sentences Prince composed himself. And many of them were permeated by race. Read more

Blood, Sweat, and Tears: A New Book on the History of Black College Football. By J.T. Roane / AAIHS

Black college football began during the nadir of African American life after the Civil War. The first game occurred in 1892, a little less than four years before the Supreme Court ruled segregation legal in Plessy v. Ferguson. In spite of Jim Crow segregation, Black colleges produced some of the best football programs in the country. They mentored young men who became teachers, preachers, lawyers, and doctors — not to mention many other professions — and transformed Black communities. Read more

Town business: Steph Curry and Warriors could be in for a long season in ‘The City.’ By Marc J. Spears / The Undefeated

While the Warriors did move eight miles, Curry and the franchise did not want to change the familiar faces behind the scenes. Most were African Americans living in Oakland or the East Bay Area. Several said that the most workers retained their jobs primarily at Warriors games and credited the team for the opportunity. While Oakland has a large black population and proud history, seeing lots of African American employees anywhere in San Francisco is not the norm with its 5% black population. Read more