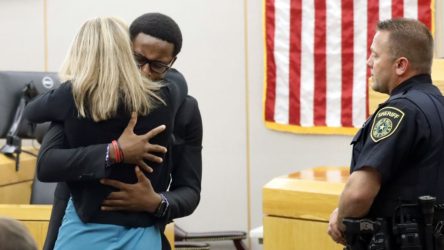 Featured – A hug of forgiveness for Amber Guyger is not absolution for America’s racism. By Isaac Bailey / CNN


Had a young black man with a history of saying racist things about white people shot and killed a white police officer in her own home, he likely would not have gotten hugs from a white judge, a hair rub from a white police officer in the courtroom and been granted a kind of absolution by the white cop’s brother. Instead of being sentenced to 10 years, he would have likely been sent to prison for the rest of his life, if not to death row. Read more  Also see, The Insanity of White Justice and Black Forgiveness

If Trump’s Rage Brings ‘Civil War,’ Where Will the Military Stand? By Patricia Ravalgi / Daily Beast

Earlier this week Donald Trump, commander in chief of the U.S. armed forces, tweeted that his impeachment “will cause a Civil War” from which the country might never recover. Picking up on remarks made by an evangelical pastor on Fox News, Trump did not just say his removal would lead to a huge electoral defeat for the Democrats, or even mass demonstrations. He said “civil war”. Americans taking up arms against other Americans in his name. The moment may come when soldiers have to choose between the Constitution and Donald Trump. No doubt most will embrace the Constitution. But some will see that as a tough call. Read more

The thought of an agitated Trump under the pressure of potential impeachment further navigating the complexities of Iran or North Korea should be profoundly unsettling. The dark portent is not that Trump will inspire a reënactment of the central conflicts of America’s past. It’s that he will author a novel catastrophe all his own. Read more

What My Father Taught Me About Race. By Susan Rice / NYT

He set out to show that regardless of the barriers, he could fulfill his God-given potential. Struggle by struggle, he did. Shown is Susan Rice and her father. Read more

When My Louisiana School and Its Football Team Finally Desegregated. By Jere Longman / NYT

In 1969, 15 years after Brown v. Board of Education, a Japanese-American football coach and an African-American player formed a bond that resonates today. Shown is Coach Nagata and his parents. Read more

More than 8 in 10 Americans (81%) say the increasing number of people of many different races, ethnic groups and nationalities in the US is enriching American culture, up from 70% in 2016 survey by CNN and the Kaiser Family Foundation. Solid majorities across party lines feel this way, including 69% of Republicans, 82% of independents and 91% of Democrats. Read more

Black men make up only 2% of teachers in the US. A group named ‘Call Me MISTER’ wants to change that. By Amy Chillag / CNN

According to the study, 43 percent of white Harvard students admitted were legacy students, children of staff, on the dean’s interest list—meaning their parents or relatives have donated to Harvard—or were recruited athletes. Aside from admits in the four categories, which the study’s authors refer to as ALDCs, only 57 percent of white student admits were meritocratic-based decisions. Read more

The two alumni groups I help lead — one Asian American, one multiracial — stood in support of diversity and race-conscious admissions, as do most Asian Americans. Alongside 23 other student and alumni groups, we signed amicus briefs and wrote affidavits, and our members took the witness stand. We were relieved that U.S. District Judge Allison D. Burroughs’s decision this week powerfully affirmed the need for the consideration of race in admissions and methodically dismissed the claim of discrimination. Read more

Tyler Perry Builds a New Kingdom, With Madea Behind Him. By Cara Buckley / NYT

As the cultural firmament shifts, he is launching his 330-acre studios and creating more content than ever. Is he sacrificing quality for quantity? It’s a debate he rejects. “If I was a white man and had done these things, and had this success, they would have had a much different reaction to me,” Perry said one late September day, sitting in his huge, plush office in the Dream Building, the center of the new studios south of downtown. “No one, black or white, has been able to do what I’ve been able to do.” Read more

In her illustrious career, Carroll won a Tony Award and was nominated for an Oscar. But she is perhaps best known for making television history when she starred as the titular character on the NBC sitcom Julia, which debuted in 1968. She’s widely seen as the first black actress to appear in a lead role depicting a non-stereotypical character on television. Carroll portrayed Julia Baker, a widowed mother raising a young son. Read more

Eddie Murphy is better than ever in Dolemite Is My Name, a bawdy comedy about comedy. By Alissa Wilkinson / Vox

Murphy plays Rudy Ray Moore, the entertainer who rose to fame in the 1970s after he created a character called Dolemite, a smooth-talking pimp who talks in rhyme and brags of his exploits. Moore recorded a number of hit comedy records as Dolemite, then made several blaxploitation movies about the character, starting with Dolemite in 1975. And his performance style later earned him the moniker “godfather of rap.” Read more

Simone Biles nails two more amazing moves that will be named after her. By Steve Almasy / CNN

The greatest gymnast of our time and probably ever, Simone Biles, has another two moves that will bear her name. The US gymnastics star was taking part in the world championships Saturday in Stuttgart, Germany, where during her floor exercise routine she landed a triple-double and then on the balance beam she nailed a double-double dismount. The triple double involves a jaw-dropping double backflip with three twists. Watch here

Harvard vs. Howard is much more than a game. By Tommy Amaker / The Undefeated

Ahead of Harvard University hosting Howard University in their first football game this week, I find myself reflecting on how meaningful our team has been at Harvard and how meaningful this game is to our respective universities, athletic programs and greater communities. To me, this is more than just a game, and Harvard and Howard are more than just schools. They are, and we are, representative of something bigger. Read more  Also see, In Historic First Meeting, Harvard Tramples Howard, 62-17