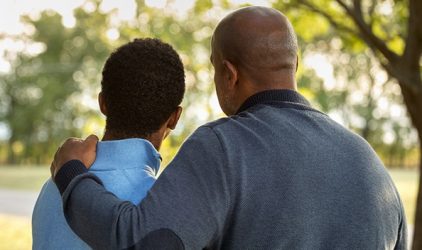 While violent police encounters involving Black people dominate headlines, the news is having a detrimental impact on the mental well-being of Black Americans, some experts say. “Our estimates, suggest that the population mental health burden from police killings among black Americans is nearly as large as the mental health burden associated with diabetes,” the authors of the study wrote. Read more

Why We Need More Close Interracial Friendships (And Why We’re Bad At Them). By Brittany Wong / HuffPost

In 2014, a study found that three-quarters of white people don’t have any non-white friends. The study, reported by The Washington Post and conducted by the Public Religion Research Institute, found that for every 100 friends a white American had, 91 were white. On average they had one Black friend, one Asian friend, one Latino friend, one mixed-race friend and three friends of unknown race. By comparison, the average Black American had eight white friends and 83 Black friends, in a 100-friend scenario. Read more

93% of Black Lives Matter Protests Have Been Peaceful: Report. By Sanya Mansoor / Time

The vast majority of Black Lives Matter protests—more than 93%—have been peaceful, according to a new report published Thursday by a nonprofit that researches political violence and protests across the world. The Armed Conflict Location & Event Data Project (ACLED) analyzed more than 7,750 Black Lives Matter demonstrations in all 50 states and Washington D.C. that took place in the wake of George Floyd’s death between May 26 and August 22. Read more

Related: Alexander Reid Ross on what the media got wrong about the Portland protests: Everything. By Chauncey DeVega / Salon

Trump told Wisconsin law enforcement officials on Monday. “Reckless far-left politicians continue to push the destructive message that our nation and our law enforcement are oppressive or racist.” History demonstrates that we must not discount such a strategy; fear has been a powerful force in our common life. We need people who have suffered from divide-and-conquer politics for the past 50 years to see through the lies and stand together against a con that hurts all of us. Indeed, this is the only way we have ever pushed toward a more perfect union. Read more

Police unions tell us how they really feel about “bad apples” and brutality by endorsing Trump. By Ben Mathis-Lilley / Slate

The country’s largest municipal police union (the Police Benevolent Association of the City of New York) picked the latter candidate; its leader, Patrick Lynch, spoke at the Republican convention. On Friday, the largest national police organization, the Fraternal Order of Police, announced that it was endorsing Trump on behalf of its 355,000 members as well. Read more

Related: Experts say Rochester police failed to use tactics designed to help those in crisis as union defends officers involved in death of Black man. By Kimberly Kindy and Tim Craig / Wash Post

Charges dropped against man who was prosecuted six times for murder. By Robert Barnes / Wash Post

All charges were dropped Friday against Curtis Flowers, a Mississippi man who was tried six times for a multiple murder, and whose last conviction was thrown out by the U.S. Supreme Court in 2019 because of a district attorney’s efforts to keep African Americans off the jury. Read more

The Republican convention was an altar call at the Church of White Masculinity. By Eric McDaniel / Salon

In a statement first shared with The Associated Press, labor leaders who represent teachers, autoworkers, truck drivers and clerical staff, among others, signaled a willingness Friday to escalate protest tactics to force local and federal lawmakers to take action on policing reform and systemic racism. They said the walkouts, if they were to move forward with them, would last for as long as needed. Read more

The Trump administration has issued a memo ordering federal agencies to end racial sensitivity training, declaring it “un-American propaganda,” according to the document obtained by The Washington Post. The two-page memo released Friday notes that President Donald Trump seeks to prevent federal agencies from spending “millions in taxpayer dollars” on the training sessions — and that any contracts involving instruction on “white privilege” or “critical race theory” be canceled immediately if possible. Read more

Here’s Why It’s A Big Deal To Capitalize The Word ‘Black.’ By Brittany Wong / HuffPost

A watershed moment came in June, when The Associated Press style guide ― which many newsrooms adhere to ― announced Black should be capitalized in “a racial, ethnic or cultural sense, conveying an essential and shared sense of history, identity and community among people who identify as Black, including those in the African diaspora and within Africa. The lowercase black is a color, not a person.” If “Black” is capitalized, should “white” be, too?  Read more

Who has the most success preparing Black students for careers in science? Historically Black Colleges and Universities. By Andrea Widener / C&EN

For decades, HBCUs have been a bright spot in the training of Black scientists including chemists. Despite their small numbers—there are just 101 HBCUs out of thousands of US colleges and universities—HBCUs send a larger percentage of their Black students on to get graduate degrees than other schools. Many of the top Black chemists who go on to successful careers in industry and academia are HBCU graduates. Read more

Jazz Has Always Been Protest Music. Can It Meet This Moment? By Giovanni Russonello / NYT

The music known as jazz grew up in New Orleans, in the decades after Emancipation, as Black and Creole people founded social clubs with their own marching bands. As it evolved, jazz remained a resistance music precisely because it was the sound of Black Americans building something together, in the face of repression. The civil rights movement progressed and white liberal audiences recognized jazz musicians to be some of the country’s great artistic leaders, but they rarely treated those musicians as the scholars and thought-leaders that they were. Read more

The Black players from the U.S. represent nearly one-tenth of the field of 128 women. The sport relies heavily on players from outside the United States, and some leading Europeans and Australians have been absent from this tournament because of the coronavirus pandemic. “It’s awesome,” Stephens, 27, said. “I think it’s an amazing opportunity for right now to get more people of color in this sport, because you can see there are so many amazing players playing.” Read more